Zanzibar has exploded in popularity, becoming one of the most famous island areas in all of Africa, if not the world. Driven by an aggressive marketing campaign in the 1980s, Zanzibar has seen tourism become a major part of its economy.

In this article, we present a beginner’s guide to Zanzibar. We’ll start with the basics, and then run through some of the best tourist activities on this beautiful island archipelago.

Zanzibar is located off the East Coast of Tanzania. The region of Zanzibar is actually a collection of several islands, known as the Zanzibar Archipelago. It contains two main islands, Unguja and Pemba, and several smaller islands. Unguja is the main island, and is most commonly referred to simply as Zanzibar. North of Unguja is Pemba island.

The main island of Zanzibar is still mostly undeveloped. It is only about 100km from the northern tip to the southern edge, and roughly 40km across. The island’s main hub, Zanzibar City lies on the western side of the island. The center of the island is mostly undeveloped tropical forest. The eastern side and northern tip are populated with many white sandy beaches, and surrounded by a coral reef. Many hotels and resorts also populate this area of the island.

Zanzibar is well known for its spice trade, pristine beaches, island lifestyle, coral reefs, and much more. Throughout this article, we’ll dive into each of these topics in greater detail.

Zanzibar’s population, according to a 2012 census, is roughly 1.5 million people.

About two thirds of Zanzibar’s population live on the main island of Unguja, where Zanzibar City is located. Zanzibar City has a population of roughly 200,000. Other notable towns on Unguja include Nungwi, Mbweni, Kendwa, Chaani, and more.

The second of Zanzibar’s two main islands is Pemba Island, with a population of roughly 360,000. The main town on Pemba island is Chake-Chake.

Outside of Zanzibar’s main cities and towns, the population is spread throughout small villages on various islands in the archipelago. These villages primarily engage in rural activities such as fishing and farming.

Zanzibar’s tropical climate is a major reason it is such a trendy tourist destination. The islands remain warm year-round because Zanzibar is so close to the equator. Expect highs above 30C (92F) year-round.

Rainy seasons occur from March to May and from November to December. The months in between receive significantly less precipitation.

Zanzibar is actually designated as a semi-autonomous region of Tanzania. While it is a part of Tanzania, it actually has its own government, known as the Revolutionary Government of Zanzibar.

Zanzibar’s main areas of industry include the two reasons it is most famous – spices and tourism. Farming and fishing are also a big part of their economic development.

Zanzibar is perhaps most famous for its spice industry. Its biggest spice exports include cinnamon, black pepper, nutmeg, and cloves. In fact, the Zanzibar Archipelago is sometimes known as the “Spice Islands” for this reason.

Zanzibar’s tourism industry remains a major part of its economy. Many tourists visit Zanzibar to stay at its many hotels and resorts, the majority of which are situated on the beaches on the eastern and northern side of the main island.

Zanzibar’s tourism gained popularity in the 1980s when the government ran an aggressive marketing campaign. Since then, it has seen consistent growth.

What to do In Zanzibar?

Now that we’ve developed a solid background knowledge on the island region of Zanzibar, let’s get to the fun stuff. We’ve written this article as a primer for tourists interested in visiting Zanzibar. Let’s examine our favorite things to do in and around Zanzibar.

There’s so much to do, that it was tough to narrow down our list. Keep your eyes open to soak up everything Zanzibar has to offer. Here are some of our top picks:

Stone Town is the historic portion of Zanzibar City. It is an ancient city which was designated a UNESCO Heritage Site in 2000. Its architecture has important historical significance in preserving the different influences of Swahili culture.

A visit to Stone Town is a fascinating experience. You get to revel in ancient stone architecture, and winding streets and alleys. The best thing to do in Stone Town is just explore. The path is winding and confusing – almost like a giant maze. Take it for what it is and simply enjoy the journey. 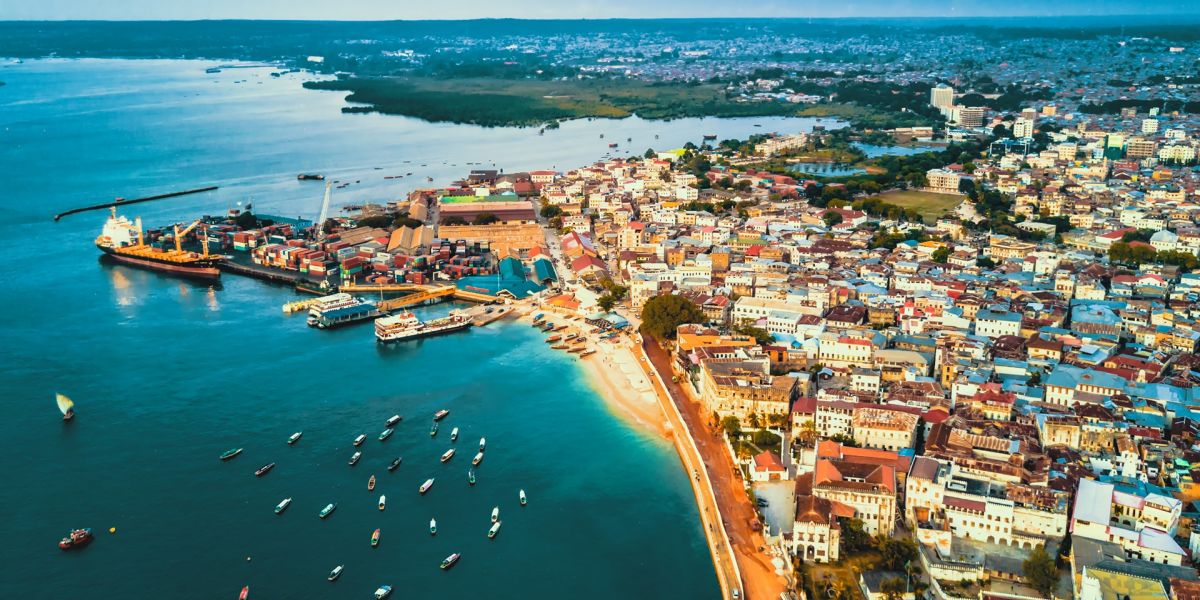 Stone Town is packed with restaurants, shops, cafés, and more. Did you know Freddie Mercury was born in Stone Town? There’s a museum dedicated to the singer that’s a must see for all Queen fans.

Stone Town is not very big, so you can easily see it all in a day. It’s located on the west side of Zanzibar city, right on the coast.

And while you’re visiting Stone Town, be sure to check out the main city of Zanzibar as well.

Zanzibar is most famous for its gorgeous pristine beaches. There are so many beaches to choose from that it’s difficult to know where to start.

Most of the popular beaches are located on the east side of Zanzibar’s main island (although there are many other beaches throughout the archipelago). 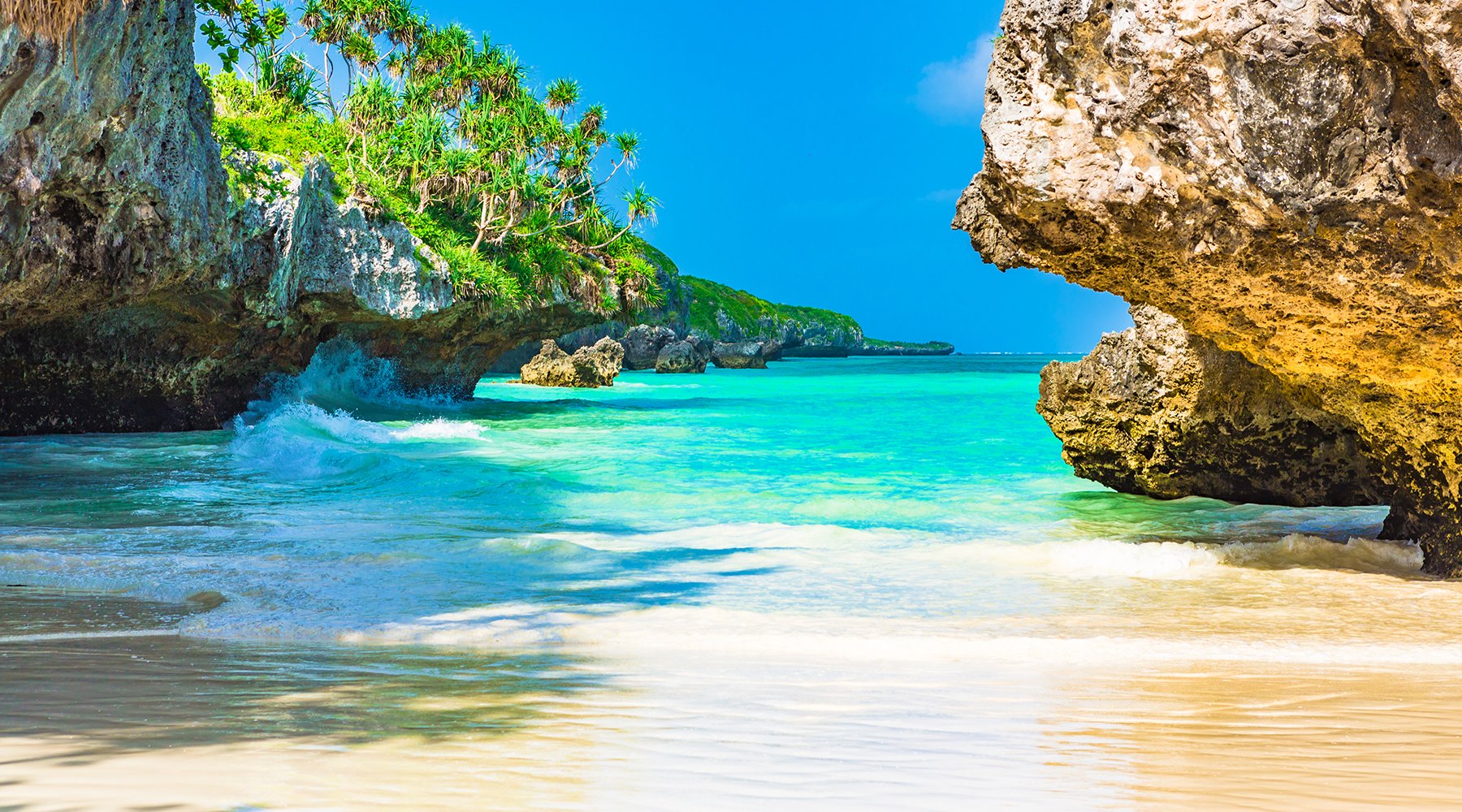 The beaches also owe their popularity to the preserved coral reef which runs along the eastern side of the island.

Bustling resort towns include Nungwi and Kendwa, on the northern side of Zanzibar Island. Here you’ll find the majority of tourists, as well as traditional beach-front resorts.  But there are many other beaches located in smaller quieter areas along the Zanzibar coast.

The beach life in Zanzibar is slow and laid back. It runs on island time, so expect life to move a lot slower than mainland Tanzania. Take your time, kick back, and enjoy these world-class beaches.

Zanzibar is also popular for one of the most classic beach activities – surfing.

Throughout the islands, there is surfing for all skill levels. You definitely have to know where to look, as the surf spots are very dependent on current weather conditions. Be wary of the coral, which presents a danger in certain areas, especially in areas with urchins. 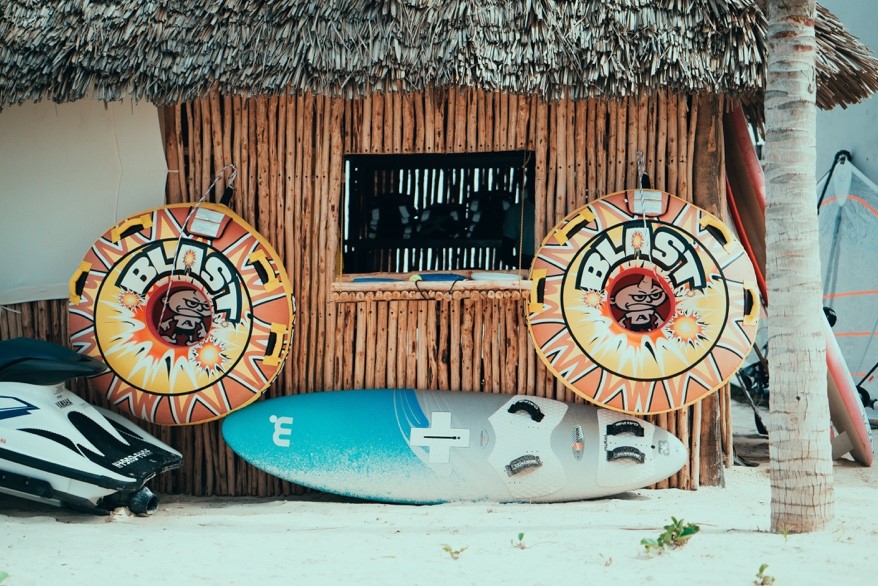 Surfing isn’t the only beach activity worth mentioning. Zanzibar is popular for windsurfing, paddle boarding, snorkeling, kitesurfing, scuba diving, and much more!

These water activities are an excellent way to see the vast tropical marine life off the coast of Zanzibar. Occasionally, dolphins will ride right alongside you as you surf or paddle.

Although touched upon in the beach section, the resorts in Zanzibar are such a big part of its tourist appeal that they deserve a section of their own.

The most popular resort villages are likely Nungwi and Kendwa, on the north side of the island. Many hotels and resorts populate this side of the island, and line some of the most gorgeous white sand beaches you will ever experience. The villages themselves are full of restaurants, cafés, and bars.

Here are some of the popular resorts in Zanzibar: 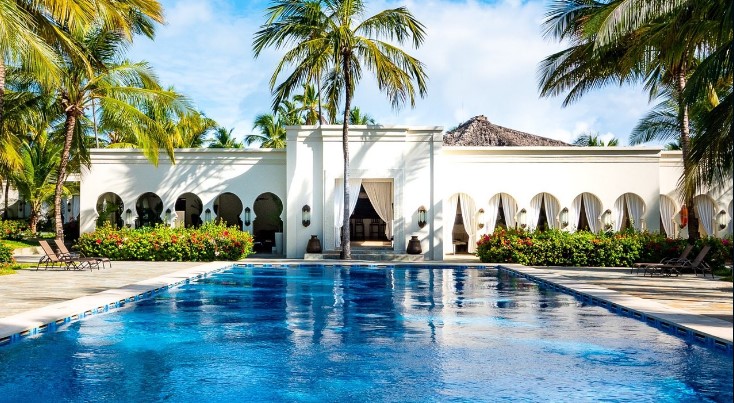 Drinking is permitted in certain beach bars and resort areas. Be aware that the majority of Zanzibar’s population is Muslim, and does not drink. It is not acceptable in their culture to flaunt alcohol openly. Be respectful.

We can’t talk about an island region famous for its spices without mentioning the food.

Zanzibar has a long and storied history, which has included many different conquests of the land. As a result, its food is a true blend of flavors and cuisines. You’ll find influence from African, Indian, Chinese, and Portuguese cuisine, and of course fresh seafood. 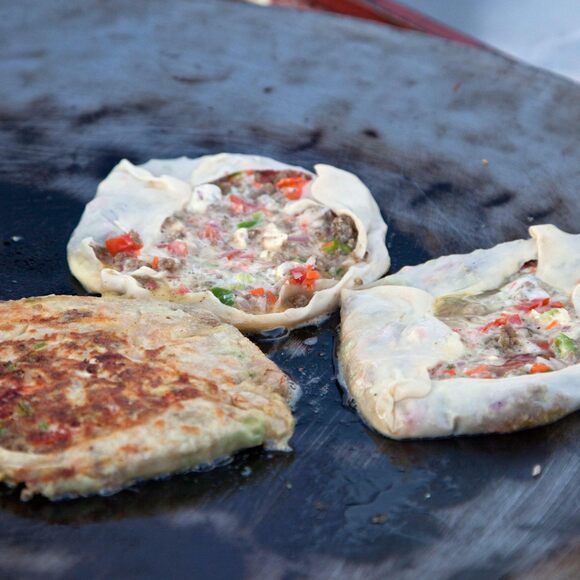 You can visit one of Zanzibar’s many restaurants or cafés, or pick up some spices and ingredients from a local market or bazaar. There are so many options available that we could write a whole separate article on it (and we did!).

Most tourists avoid Zanzibar during its primary rainy season, which lasts from March to May. There are pockets of nice weather, but there is potential for some pretty heavy downpours which might put a damper on your beach vacation.

There is a lighter rainy season from November to December, which is considered the best time to visit Zanzibar on a budget. 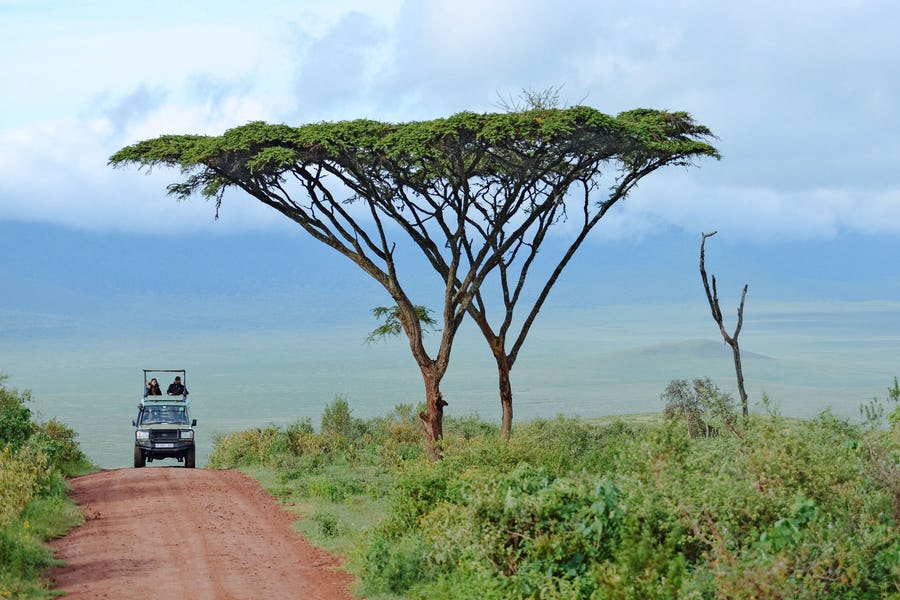 Zanzibar’s peak tourist seasons are from June to October, when the weather is cooler and drier (but still quite hot), and during December to February, when it is slightly hotter but still dry.

If you’re looking for clear, blue skies and hot weather, then either of these seasons are a great time to see Zanzibar. The island will be much busier during these times though, and your stay will be more expensive.

Thanks for reading our comprehensive guide to Zanzibar. We hope our guide has piqued your interest about this wonderful island region. We aimed to give you a significant amount of background knowledge, as well as some practical tips for what to do as a tourist.

For more on Tanzania, check out our guide to the Serengeti.

Before we wrap up, let’s answer some of the most frequently asked questions about Zanzibar. We wanted to make this a comprehensive guide, so here are some of the most important things for tourists to know:

Is Zanzibar safe for tourists?

Generally speaking, yes, Zanzibar is extremely safe for tourists. In fact, it is considered among the safest African destinations. This is particularly true if you keep to the main areas in the cities, villages, and resorts.

Of course, common sense always applies and you need to use your best judgment in any area that you travel.

How expensive is Zanzibar?

Like many tourist destinations – it depends. It’s definitely on the more economic side compared to other worldwide destinations. Zanzibar can still be done quite easily on a big budget. You can certainly find lodging and food for very reasonable prices, or as with many resort destinations, you can  pay for luxury.

Can you drink alcohol in Zanzibar?

Yes, you can drink alcohol in Zanzibar, but it is more limited than most travel destinations. Very few stores sell alcohol and many restaurants don’t serve alcohol.

In the touristy destinations it’s not hard to find. It’s prevalent at the resorts, bars and restaurants. Many of the locals do not drink alcohol, as the dominant religion is Muslim.

Are there sharks in Zanzibar?

Yes, there are sharks off the coast of Zanzibar. The most common species is the Reef Shark. There are also quite a few Whale Sharks.